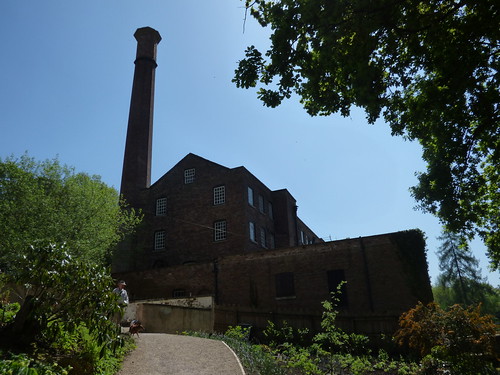 A visit to Quarry Bank Mill on a warm early May Bank Holiday Monday.

This was the first time in around 25 years that I came back here. Other than the mill itself being closed for renovation works, the rest of the National Trust Quarry Bank site was open.


The mill is quite close to Manchester Airport so you could hear / see planes taking off!


Quarry Bank Mill (also known as Styal Mill) in Styal, Cheshire, England, is one of the best preserved textile mills of the Industrial Revolution and is now a museum of the cotton industry. Built in 1784, the mill is recorded in the National Heritage List for England as a designated Grade II* listed building, and inspired the 2013 television series The Mill.

Quarry Bank Mill is on the outskirts of Styal in Cheshire, abutting and to the south of Manchester Airport. The mill is on the bank of the River Bollin which provided water to power the waterwheels. It was connected by road to the Bridgewater Canal for transporting raw cotton from the port of Liverpool. The site consisted of three farms or folds.


It's a Grade II* Listed Building.

Massive wheelpit of 1819 formerly contained 32 ft. diameter waterwheel
by Thomas Hewes, replaced by 2 turbines in 1904. A 25 ft diameter
waterwheel similar in design to Hewes's and by his pupil Sir William
Fairbairn, from Glasshouses Mill, Pateley Bridge is soon to be
installed (1983). For full history see M B Rose The Gregs of Styal
National Trust, 1978.

This text is from the original listing, and may not necessarily reflect the current setting of the building.