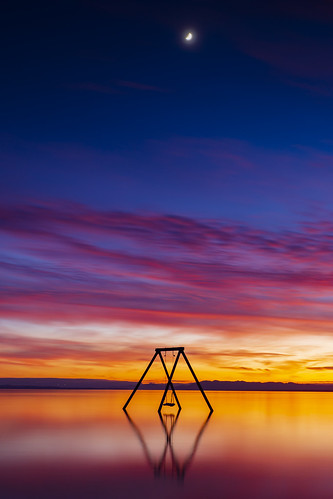 Last night (November 30, 2019), southern California was treated to a spectacular sunset that exploded with color and lasted about an hour before the sky turned dark. This is a single exposure shot this at Bombay Beach at the Salton Sea. Unlike many of my previous shots here, the water wasn't totally calm, so I used an ND8 filter, narrow aperture, and long exposure to make the water as smooth as a mirror here. I then used the Graduated Filter tool in Lightroom to make the moon and the upper sky a bit darker. Specifics: Canon 6D and Canon 17-40mm f/4L lens, 25 sec f/4.5 ISO 50, and a Hoya ND8 filter.

The name of this art installation is "The Water Ain't That Bad, It's Just Salty" and it was created by Chris "Ssippi" Wessman & Damon James Duke with the Bombay Bunny Club in an effort to get people into the water to realize that the water is fine... it's just really salty.

This piece had definitely produced the outcome desired by the artists - and that's an understatement! Numerous everyday people (including myself), amateur and professional models from around the world, Instagram influencers, and more have stepped through the water (between knee and thigh depth - depending on your height and build) to play or pose on this swing. As someone that wants to see the Salton Sea restored, I think it's great. Too many people are afraid to go in the water at the Salton Sea, but most of the time it's as safe as the Pacific Ocean water off the coast in San Diego, L.A., and other major coastal California cities. The fish are dying due to the water being too salty - NOT due to toxic chemicals. Despite the appearance of being abandoned, the Salton Sea water is regularly tested by the health department. One should avoid contact with the algae blooms (mostly present during the hotter times of year), however.