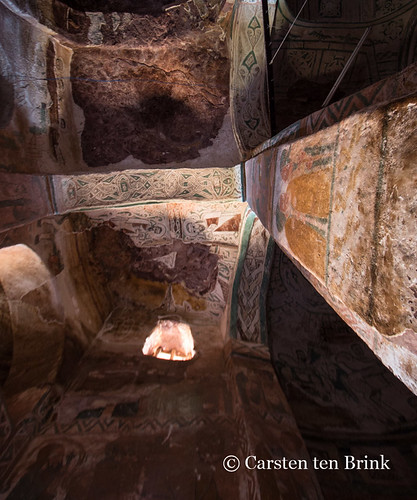 "Debre Tsion is located near Degum village, which is about 18 km Southeast of Hawzien. Debre Tsion sits atop a prominent mesa-top, which can be accessed after a serene 40 -minute hike. The rock-hewn church is situated at the top edge of the escarpment where it proudly overlooks Degum and the entire Hawzien plain.Often referred to as Abune Abraham, after the monk who founded it, Debre Tsion is a church entirely hewn from a living rock. It is rectangular in shape and is supported by six cruciform pillars, which are surrounded by a cloister.
The back walls are ornately decorated by fine paintings of saints and apostles. The dome is particularly beautiful and adorned with vivid murals. Unfortunately some of the paintings were damaged over the centuries by water seepage.
Because of the simplicity of the lines and colours, the paintings are estimated to be from the 15th century, where the church itself was most likely constructed in the 14th century.
A 15th century unique circular ceremonial fan with wooden framework makes the visit to this church special. Each of its 34 panels is finely painted with figures of the apostles.
There is also a small domed room considered to have served as Abune Abraham’s prayer room. Its walls are decorated with many geometrical designs and saints; it is indeed a manifestation of the great stone workmanship that was prevalent in the whole of Tigray both at that time and before."