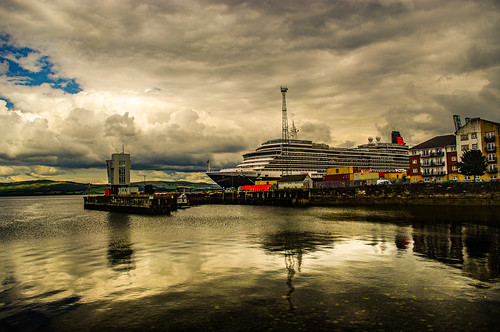 MS Queen Victoria (QV) is a Vista-class cruise ship operated by the Cunard Line and is named after the British Monarch Queen Victoria.

Queen Victoria is of the same basic design as other Vista-class cruise ships including Queen Elizabeth. The external and internal designs are more in keeping with Cunard's style, and at 90,049 GT it is the smallest of Cunard's ships in operation.

Unlike many previous Cunard ships, Queen Victoria is not a traditional ocean liner as she does not have the heavy plating throughout the hull. However the bow was constructed with heavier plating to cope with the transatlantic run, and the ship has a high freeboard.

The Queen Mary 2 had cost approximately $300,000 US per berth, nearly double that of many contemporary cruise ships, so Cunard made the economical decision to base Queen Victoria on a modified Vista-class cruise ship, and Queen Elizabeth retains the same design with some minor changes. Nonetheless, Ian McNaught, who was Queen Victoria's captain in 2009, has asserted that the ship is a liner based on her classic decor.

Originally destined to be an addition to the Holland America Line fleet, the order for a Vista-class vessel put into Fincantieri was soon transferred by Carnival Corporation & plc (parent company to Holland America, Cunard, and P&O) to Cunard with the intent that the vessel would become the MS Queen Victoria. The keel was laid down at the Fincantieri ship yard in 2003. However, due to restructuring within Carnival Corp., as well as a later decision by Cunard that modifications should be made to the design to bring in certain aspects which had proved successful on Queen Mary 2 (such as décor, junior suites, dining alternatives, promenades, etc.), the hull was then designated to become the P&O ship MS Arcadia. A new Queen Victoria was subsequently ordered with Fincantieri in 2004, which was 11 metres longer, 5,000 tons larger, and with an increased passenger capacity of 2,000.

The keel was laid on 12 May 2006. 80 prefabricated steel "blocks", each complete with interior structure, cabling, and ducts, and each weighing 325 tons, were then added. The completed hull with superstructure was floated out on 15 January 2007, after having a bottle of Prosecco smashed against her side by Maureen Ryan, a Cunard employee who has served on all four Cunard Queens. The ceremony also saw the traditional placing of coins on the mast – in this case a Euro and a gold Queen Victoria sovereign were welded beneath the radar mast.

Queen Victoria departed the Port of Venice on 24 August 2007 to commence her sea trials, and, after handover to Cunard, arrived in Southampton to fanfare and media attention on 7 December; much of the coverage being focused on the ship's superlatives, and representing Queen Victoria as "Cunard's most luxurious ship."

The same day, the ship was officially named by Camilla, Duchess of Cornwall, continuing the tradition of Cunard Queens being named by royalty. The bottle of champagne did not break upon impact with Queen Victoria's hull, which according to nautical superstition is a bad omen. However, a backup bottle was immediately successful.