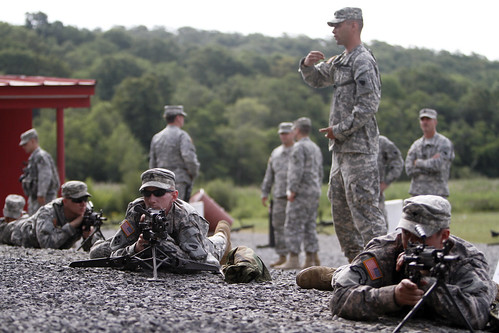 New cadets assigned to Company A were on the range July 28 for weapons familiarization. Soldiers attached to the 3rd Battalion, 304th Training Regiment out of Lewiston, Maine, instructed new cadets on the assembly and firing of the M249 SAW (squad automatic weapon) and the M240 machine gun. Following a safety briefing, they learned the main differences between the two machine guns and what field environments they are most effective. Before sending rounds downrange, the new cadets practiced loading and clearing the weapons and what to do if it malfunctions. Photo by Mike Strasser, West Point Public Affairs