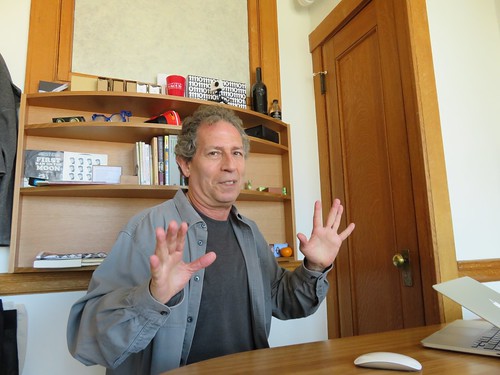 My friend Michael Naimark is exploring new ideas for virtual reality experiences, in collaboration with Google and other researchers. To discuss this work, we got together with two other colleagues, Steve Gano and Jim McKee -- with whom we worked at the Apple Multimedia Lab in the eighties, pushing the envelope on related questions.

We started with a tour of the historic Sentinel Building in North Beach, home of American Zoetrope -- where Francis Coppola worked on many cinematic masterpieces like The Godfather and Apocalypse Now. We checked out the underground screening room and sound mixing room where some of that work took place, then headed upstairs to Michael and Jim’s studios, for a wonderful conversation about the new VR frontier.

Michael and his colleagues are researching how people are represented in virtual reality. Their first experiment at Google’s “Big Chairs” Park led to some helpful guidelines on how to film people for VR, by using different camera angles and distances.

They’re also investigating ‘hyper-images’ that resemble a group of people, but that are shot at different times and composited together to create both ‘credible’ and ‘incredible’ pictures. To enable more experiments like these, Michael is developing ‘IMU VR’, a new type of camera that could make it easier for communities to tell their stories in VR. More on this later.

It was great to reconnect with my colleagues and brainstorm these ideas together. It felt like the good old days, and the creative juices were flowing all over again ...