portrait of Margaret of Valois 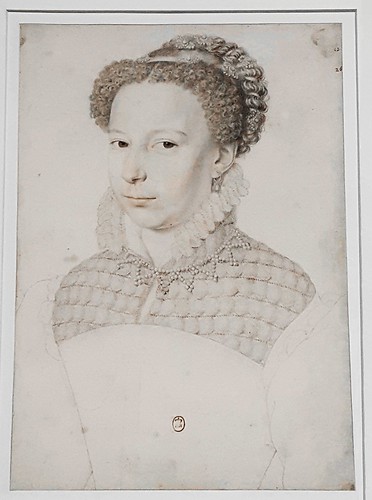 Portrait of Margaret of Valois, on display as part of the Valois Tapestries at the Cleveland Museum of Art in Cleveland, Ohio, in the United States.

Black and red chalk on paper, about 1571. Artist unknown. Owned by the Bibliothèque nationale de France.

Margaret was the seventh child and third daughter of King Henry II of France and his queen, Catherine de' Medici. Well-educated, she was highly intelligent and had a wide range of interests in the arts, history, religion, and politics.

She was married at the age of 19 to her cousin, Henry of Navarre. The marriage was marred by the St Bartholomew's Day massacre -- a wave of Catholic mob violence directed against the Huguenots, in which 30,000 Protestants died across France. (Her marriage is now known as the "red wedding", for the bloodshed it caused.)

She took the side of Francis, Duke of Anjou, her younger brother, in supporting the Protestants.

She tried to bring peace between her husband and Henry III, but largely failed. Sterile, her lack of an heir strained her marriage. In 1585, she switched to the Catholic side. Her husband exiled her in 1586 to the castle of Usson in Auvergne. For 20 years, she lived there, creating a court of arts and letters.

When her husband ascended the French throne in 1589, he converted to Catholicism and asked Margaret for an annullment so that he might remarry and produce an heir. She finally agreed after Henry promised her a massive financial settlement and retention of her title as Queen of Navarre. The annulment was promulgated in October 1599. (Henry IV married Marie de' Medici in 1600, who nine months later gave him a son.)

Following the annulment, the relationship between Henry and Margaret improved dramatically. He allowed her to return to Paris, where she successfully sued to regain control of her mother's estate. She then made Henry's son, the future Louis XIII, her heir. She became good friends with Queen Marie de' Medici, and helped plan social events at court. She died in 1605.