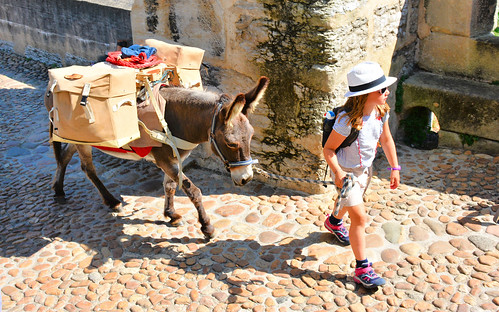 A young Pilgrim crosses the Pont Valentre in Cahors, France. (Her parents were just out of the shot.)

The Camino de Santiago is a network of pilgrims' ways serving pilgrimage to the shrine of the apostle Saint James the Great in the cathedral of Santiago de Compostela in northwestern Spain. The various "Ways" start from all over Europe and most are several hundreds of miles long.

The walk has been in continuous use since the early days of Christianity and the routes have regained considerable popularity in recent years. There have been more than a quarter of a million walkers and cyclists travelling the Camino in each of the last 4 years. A very small percentage do the walk accompanied by a donkey, the traditional beast of burden that has been used for more than 2000 years.

The main Way through Southern France is known as the Camino Francés and at Cahors crosses the Pont Valentre, a fortified 14th Century river crossing - which is where I got this shot.