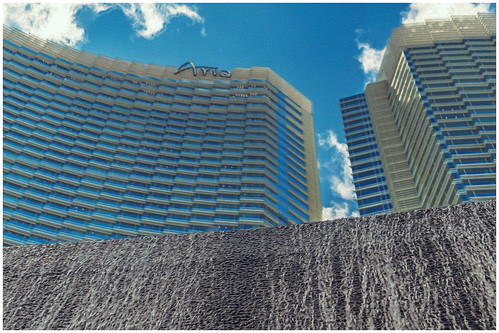 Aria Resort and Casino is a luxury resort and casino, part of the CityCenter complex on the Las Vegas Strip in Paradise, Nevada. Aria consists of two curved glass and steel highrise towers adjoined at the center. It opened on December 16, 2009 as a joint venture between MGM Resorts International and Infinity World Development. At 4,000,000 sq ft (370,000 m²) and 600 ft (180 m) in height, it is the largest and tallest structure at CityCenter. The resort's 61 and 51-story towers contain an American Automobile Association five diamond hotel with 4,004 guest rooms and suites, 16 restaurants, 10 bars and nightclubs, and a casino with 150,000 sq ft (14,000 m²) of gaming space. It also has a 215,000 sq ft (20,000 m²) pool area with 34 cabanas, an 80,000 sq ft (7,400 m²) salon and spa, a 300,000 sq ft (28,000 m²) convention center and a 1,800-seat theater which hosted Zarkana by Cirque du Soleil, until closing April 30, 2016. Among the most notable aspects of Aria is its incorporation of technology in the exterior and interior design of the hotel, specifically for the reduction of energy consumption. It is the largest hotel in the world to have earned LEED Gold certification. On account of its smart rooms which automatically adjust curtains, turn off unused lights and electronics, and regulate the temperature when a guest enters or leaves a room, Aria was described in Popular Mechanics as possibly "the most technologically advanced hotel ever built".
en.wikipedia.org/wiki/Aria_Resort_and_Casino