Home » Photos » Though still captive, this lion is framed in a near natural ...

Though still captive, this lion is framed in a near natural environment 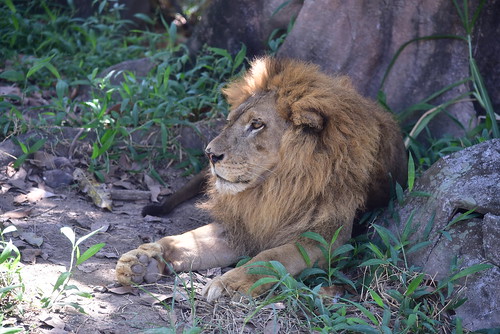 Though still captive, this lion is framed in a near natural environment. At the onset, let me be frank and honest with you. I'm not tracking wildlife on foot with a tour guide, nor am I on safari in Africa. (been there, done that in 2010). I am in an air con bus in the Bali Safari and Marine Park in Bali, Indonesia. It's a large facility which offers elephant rides (sorry, I actually indulged, despite my reservations about elephant riding) and a drive around the park by safari bus. The buses are aircon and have large picture windows, though tinted/ darkened, a far cry indeed from the bird cage like dense mesh of safari vehicles in some parks in India where the car rattles like there is no tomorrow! I was amazed by the clarity of the FX sensor of my new Nikon D750 (I've always been shooting DX cameras so far)- I think the good old Nikon did a commendable job here despite this picture being shot from a moving car on a bumpy road and from behind tinted/ darkened glass! The king of the jungle cools off here in the shade in the park. Incidentally, the park is now called the Bali Safari and Marine Park but I found no trace of water anywhere close to the facility! I had just mentioned in my previous caption that I do not generally like to take pictures of captive animals but I has able to take advantage of the Bali Safari's superb landscaping and this lion being generous enough to leave this artificial cave and sit here near some kind of a near natural setting. (Bali, Indonesia, May 2018)