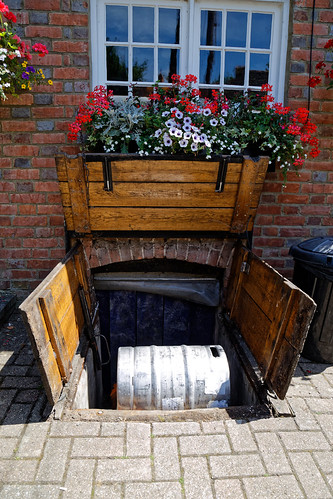 This image is from a Flickr album for the The Blackhorse Inn at the village of Nuthurst, near Horsham, West Sussex, England. The pub, apart from being very good for food, is one of the most haunted in Sussex. Its paranormal entities include a murderer who moves glasses and other objects across a particular table; the feral 'Black Hound of Nuthurst' who is sighted on Black Hound Weir at the rear of the pub; 'Nuthurst Ned' whose ghost late at night stamps and snorts in the street outside; and a young woman whose apparition appears at an upstairs window. Full descriptions of this and the other album images can be found here: Black Horse Inn photos
__________________________________________________

This is one of a number of pubic house photos with Creative Commons Attribution-Share Alike 4.0 International licence. See: public houses My Wikimedia images under this name can be found here: Acabashi

Republishing this image in any media, form or adaptation is allowed, but requires the author's name to be stated, typically: 'photo by Acabashi'. If this attribution is not given, the license for the follow-on use is automatically revoked, reuse becoming copyright infringement. See: legal code conditions

This file has been released under a license which is incompatible with Facebook's licensing terms. It is not permitted to upload this file to Facebook.