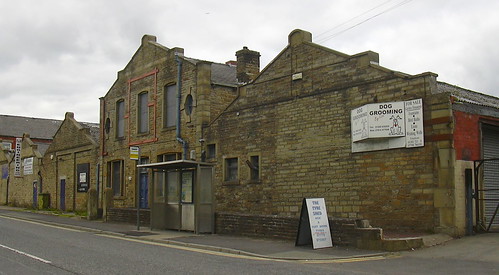 I was working in a weaving mill called Brow Head Mill and we were playing for warps and wefts so I signed on the Dole for seven weeks and then received a card telling me to report to WH Dean and Sons on Accrington Road. They made munitions. We made shell case containers — I was a soft metal solderer — there wasn’t a lot to it. While I was there I applied to join the WAFS but I received a letter saying that my work in civilian life was more important than me joining the Forces.

I learnt French at Deans — from a man called Michael O’ Sullivan who had been in France in the First World War. He taught me things like “Il fait froid ce matin,” which means “It’s a cold morning” and “Donnez moi un besse,” which means “Give us a Kiss.” He wrote the French on a piece of metal with the pronunciation and the translation in English.

I had a friend called Alice Whittam who also worked at Deans. Her boyfriend Eric went up with one of our pilots and they flew over Burnley. When the pilot asked Eric where he lived, Eric looked out and Burnley looked just like a lake. The air was full of smoke from the chimneys of the weaving mills and you couldn’t see the town at all — I think that was what saved us from being bombed.