Home » Photos » Trying to get a shot, sadly there were people obscuring the ...

Trying to get a shot, sadly there were people obscuring the deity inside 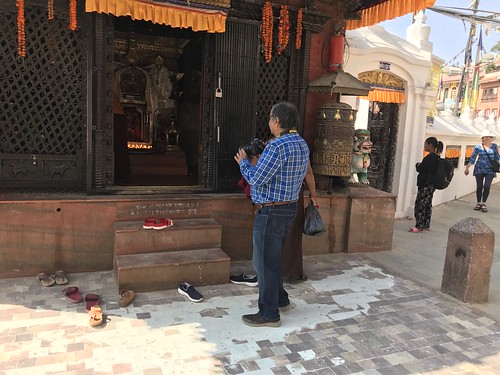 I am at the revered Boudhnath Stupa near Kathmandu, Nepal. It is possible to circum ambulate the stupa while rotating the prayer wheels set inside small rectangular receptacles in the external boundary wall. There are gaps though, where one has to taper off- some are small gates which lead into the Stupa enclosure. Another major impediment is this small shrine set against the boundary wall. Prayers were in full swing in this small shrine just outside the Boudhanath walls. I tried to keep a distance as the Nepalese are generally skittish about taking pictures of the main sanctum in all their temples. There was fortunately a bit of a lull in the people walking about, and the people praying inside seemed to be far too preoccupied to bother with me, so I moved in closer, trying to get a shot. Sadly the faithful inside, and the priest, were completely blocking the presiding idol inside the temple. I tried to hang around a bit, hoping they would move. (Kathmandu, Nepal, Oct/ Nov 2019)