Protesting The U.S. War On Syria 1 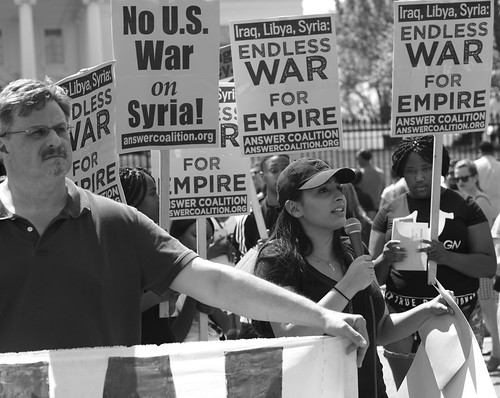 Washington DC, April 14, 2018. Around two hundred activists associated with Answer Coalition, Code Pink, Veterans For Peace, Socialist Alternative and other peace groups gathered in front of the White House to protest the latest wave of intensified bombing in Syria by the U.S.A., Great Britain and France. In a brief address to the nation last night President Donald J. Trump suggested that the bombing of Syria could be an open ended affair of uncertain duration. The neocolonialist coalition bombing last night near Damascus and other cities was supposedly a retaliation for the evil Syrian President Bashar al-Assad's most recent use of chemical weapons. An International inspection team arrived in Damascus just yesterday and have not yet determined the source of the chemical attack. This morning, President Trump foolishly declared "mission accomplished". Heard that one before?
Postscript. Reporters Robert Fisk from The Independent of Great Britain and Pearson Sharp of One America News
were unable to confirm that the alleged chemical attack had indeed occurred when they visited the site and the surrounding neighborhood in Douma, Syria.