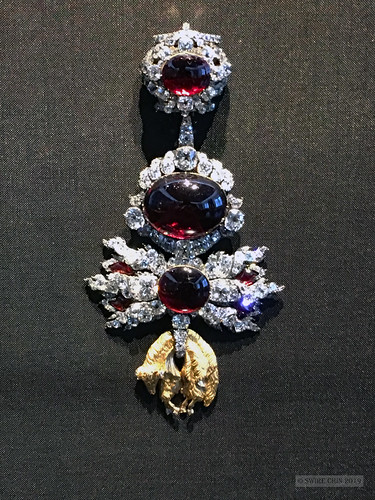 This morning (2019-11-25) when I launched the BBC News web site I was quite distressed and angered to hear that there has been a heist at Dresden's Grünes Gewölbe ("Green Vault") museum overnight and a number of priceless diamond jewels have been stolen.

Dresden's Residenzschloss palace houses several museums, including the Grünes Gewölbe. Its Baroque objet d'art collection is considered the best and most valuable in the world, which includes an enormous collection of Medieval, Renaissance and Baroque Royal Saxon diamond, ruby, emerald, sapphire jewels. The collection is open to the public, but photography is not allowed, except for a few less important pieces (yes, this is considered a "minor" piece, if you can believe that!)

For its historical significance, the jewels are truly priceless. The museum is still trying to assess the loss, with some reports suggesting that if a value must be assigned, the loss could be as much as one billion Euros.