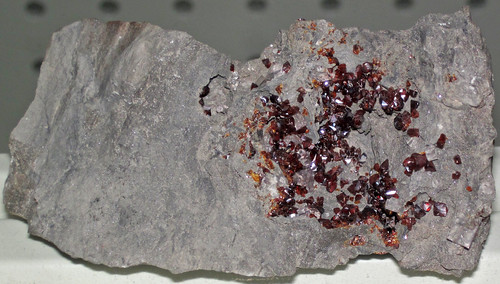 A mineral is a naturally-occurring, solid, inorganic, crystalline substance having a fairly definite chemical composition and having fairly definite physical properties. At its simplest, a mineral is a naturally-occurring solid chemical. Currently, there are over 5500 named and described minerals - about 200 of them are common and about 20 of them are very common. Mineral classification is based on anion chemistry. Major categories of minerals are: elements, sulfides, oxides, halides, carbonates, sulfates, phosphates, and silicates.

Sphalerite is a somewhat common zinc sulfide mineral (ZnS). It has a metallic to submetallic to resinous to adamantine luster. Many metals can substitute for the zinc, such as iron, cadmium, and manganese. Sphalerite almost always has some iron in it, so a better chemical formula would be (Zn,Fe)S. Sphalerite has a wide color range, depending principally on iron content. Pure to almost pure sphalerite is whitish to greenish. With increasing iron content, sphalerite becomes yellowish to brownish to blackish. One variety of sphalerite has a strikingly intense dark red color (ruby sphalerite). It's streak color also varies with iron content from whitish to pale yellowish to brownish. Sphalerite is also distinctive in being moderately heavy for its size and having six different planes of cleavage.

Sphalerite is the most important zinc ore mineral. Zinc produced from sphalerite is used for many purposes, including mixing with copper to produce brass, rust protection of iron & steel, and for making modern American pennies (although the cost of making each zinc penny is >1¢).