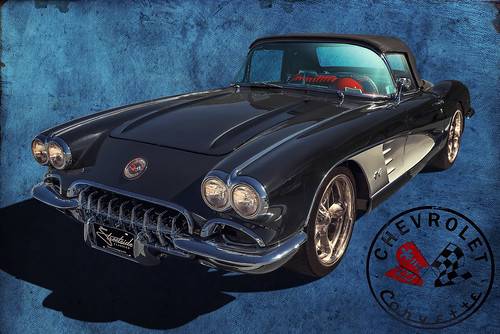 Photographed at the 2018 Spring Rod Run in Pigeon Forge, Tennessee. Pigeon Forge is a mountain resort city in Sevier County, Tennessee, in the southeastern United States. As of the 2010 census, the city had a total population of 5,875. Situated just 5 miles north of Great Smoky Mountains National Park, Pigeon Forge is a tourist destination that caters primarily to Southern culture and country music fans. The city's attractions include Dollywood and Dollywood's Splash Country as well as numerous gift shops, outlet malls, amusement rides, and musical theaters.

The Chevrolet Corvette (C1) is the first generation of the Corvette sports car produced by Chevrolet. It was introduced late in the 1953 model year, and produced through 1962. It is commonly referred to as the "solid-axle" generation, as the independent rear suspension did not appear until the 1963 Sting Ray. The Corvette was rushed into production for its debut model year to capitalize on the enthusiastic public reaction to the concept vehicle, but expectations for the new model were largely unfulfilled. Reviews were mixed and sales fell far short of expectations through the car's early years. The program was nearly canceled, but Chevrolet would ultimately stay the course.
en.wikipedia.org/wiki/Chevrolet_Corvette_(C1)