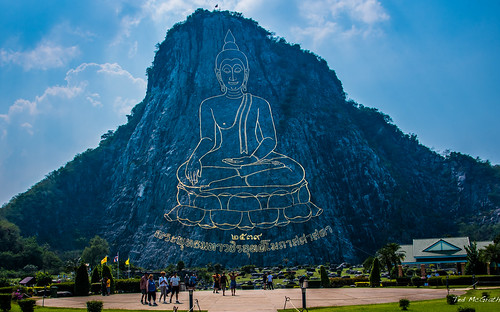 Khao Chi Chan, or as it is more commonly known, Buddha Mountain has become an iconic landmark in Pattaya and a popular tourist attraction. The giant golden Buddha carved into the face of a mountain cliff is set among a beautiful and tranquil park.

A short walk along paved paths brings you to the base of the mountain to appreciate the gigantic scale of the carving. There is a small lake at the foot of the mountain filled with lilies and lotus flowers.

The mountain was originally mined for U.S. Army and Air Force projects at the local Utapao Airport during the Vietnam War. The mining continued for several years after the Americans departed, eventually leaving the sheer face of the mountain seen today.

In 1995 the idea to carve a giant Buddha on the side of the mountain was hatched by Somdet Phra Yannasangwon the supreme patriarch of Thailand (head of the monastic order) at the time.

In 1996 construction began on the carving. It was designed by computer before being laser etched into the mountain. After the Buddha image was filled in with gold leaf, a project that took several more months to complete.

The buddha was finished in time to celebrate the golden jubilee (50th anniversary) of King Bhumibol’s ascension to the throne of Thailand.

The Khao Chi Chan 109 Metre tall image was designed in Sukhothai style and depicts a seated Buddha with hand on knee.