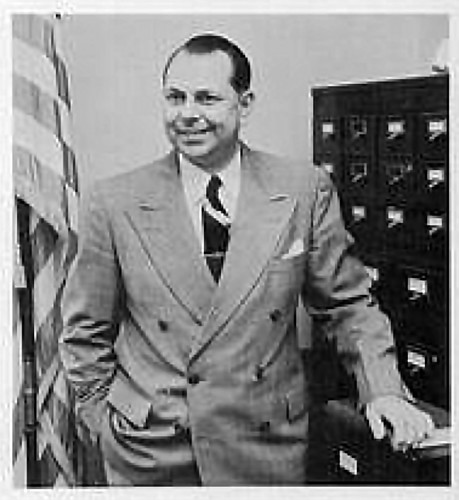 Walter Horn is shown in a 1957 photograph while he was Dean of Boys at Roosevelt High School in Washington, D.C.

He was charged by a former teacher Rosa K. Weiner and former student Reginald Booker with continuing racist and discriminatory treatment against black students in 1961 in an article in the Washington Afro American and in testimony before Congress.

Booker charged that although schools had been desegregated in 1954, black students were forced into lower tracks and the subject of bias by Horn and vice principal Erma R. Chapman.

Booker was quoted as saying, “Everything you wrote in that article was true. The white teachers at Roosevelt gave Miss Wiener a hard time because she treated the colored students decently. There were all kinds of racial segregation at Roosevelt because of [assistant principals] Mr. [Walter E.] Horn and Mrs. [Erna R.] Chapman.”

Stone said that Booker confirmed details of Wiener’s account including the barring black students from the stage crew and the refusal to permit black students to work in the school bank.

However, Stone said it was Booker who offered the sharpest indictment of the school system:

He would go on to help desegregate department stores and hospitals, refuse to fight in Vietnam, organize a boycott of D.C. schools, lead a fight against building D.C. freeways and for a public takeover of the bus system and to build the Metrorail system.

He would fight to increase the number of black workers in the building trades and upgrade those in the federal and District of Columbia governments.

In a long activist career, he would be a founding member of the Black United Front, leader of several rights and black liberation groups, lead many battles against police brutality and a host of other rights issues.

Booker died without fanfare in 2015

For a detailed account of Booker’s activism, victories and defeats, see washingtonareaspark.com/2020/01/28/the-d-c-black-liberati...

The photographer is unknown. The image is from the 1957 Rough Rider Yearbook.