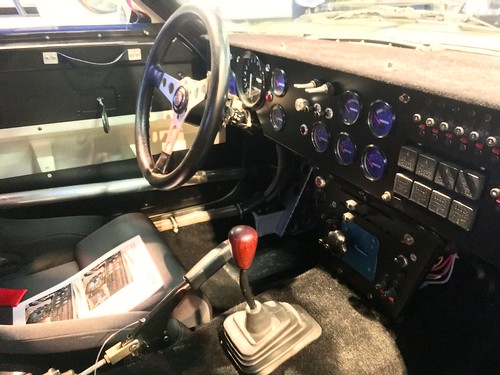 The Works Mazda RX-7 Group B car was created under the guidance of Achim Warmbold and constituted Mazda’s effort for the ‘Golden Years’ of the Group B Rally Championship between 1983 and 1987. Warmbold and his team were obligated to build just 20 examples for Group B homologation. Due to the sudden demise of Group B in 1987, however, just seven of the original 20 were fully assembled, the remainder being left for parts or spares.

Chassis MRTE 019, the example presented here, was completed in 1985 and is one of the aforementioned seven RX-7 Group B cars built. Unlike its identical siblings, however, MRTE 019 is unique, as it has never been used. Originally kept in Belgium at Mazda Racing Team Europe’s facility after Group B’s termination, it was acquired as part of a larger lot of RX-7 chassis and spares by the Swiss Mazda Importer in the early 1990s. Having been displayed in Switzerland for a number of years, the car re-entered automotive obscurity as part of a private collection before making its way into its current owner’s possession, albeit via a period in Scandinavia.

Being a true disciple to detail, its current owner commissioned a six-month investigative ‘light-touch’ restoration to ensure that every detail is correct. It is now therefore offered for sale not only in original factory condition, but also in exact Works specification. Chassis number MRTE 019 is all but certainly the most original and only unused Works specification Mazda RX7 Group B rally car in existence. It is quite possibly also the only unused Works Group B rally car left in the world.