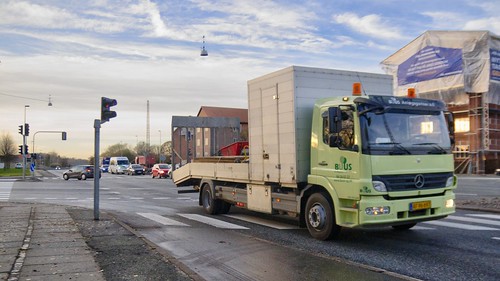 In late november 2016, I decided to go for one last photo session that year at Marselis Boulevard after some very good sessions there a couple of months earlier. Turned out not to be a very good idea... despite being a sunny day, there were also quite a few clouds to mess with the lighting. Being late november, the sunset came early as well, so the short session yielded very few good photos. At the time of this photo, I had decided to go home, just kept the camera out on the way back. The very loose crop is done on purpose, to show the clouds and the sun about to set.

The blurry photo is the result of a (failed) compromise between shutter speed, iso and aperture, trying to deal with the fading light.

Tip: to locate trucks of particular interest to you, check my collections page, "truck collection" (www.flickr.com/photos/lavulv/collections/72157684190396672/ ) - here you will find all trucks organized in albums, by haulier (with zip-codes), year, brand and country.

Retirement age for trucks: many used trucks are offered for sale on international markets. If sold to a foreign buyer, this will not be listed in the danish motor registry, so a "retired" truck may or may not have been exported. In other words, the "retirement age" only shows the age, at which the truck stopped running on danish license plates.