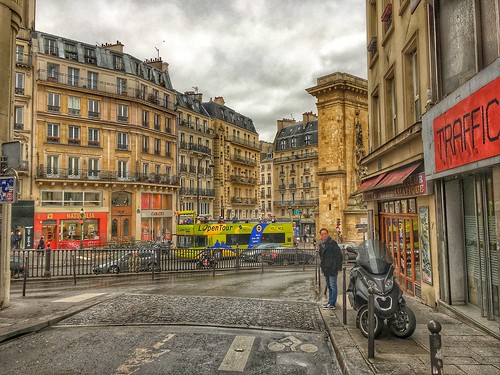 The Porte Saint-Denis is a Parisian monument located in the 10th arrondissement, at the site of one of the gates of the Wall of Charles V, one of Paris' former city walls. It is located at the crossing of the Rue Saint-Denis continued by the Rue du Faubourg Saint-Denis, with the Boulevard de Bonne-Nouvelle and the Boulevard Saint-Denis.
To replace the old gateway of Porte Saint-Denis, Louis XIV commanded architect François Blondel and the sculptor Michel Anguier to build him a monumental archway that would honor the capture of Franche-Comté in 1668 and the victories on the Rhine during the Franco-Dutch War. Work began in 1672 and was paid for by the city of Paris.

A monument defining the official art of its epoque, the Porte Saint-Denis provided the subject of the engraved frontispiece to Blondel's influential Cours d'architecture, 1698.[1] It was restored in 1988.