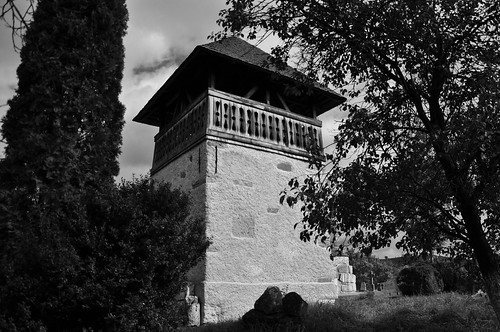 Probably built on the site of a 2nd century Roman temple or mausoleum, might have also been a 4th century Christianized Roman temple, with the main construction faze dating hypothesis ranging from the 7th century to the 12th-13th centuries, and later additions from the 15th-17th centuries. Fragments of 15th century frescoes are preserved inside.

Hateg region contains several striking old stone masonry churches built in Romanian villages as Orthodox churches but with Roman-Catholic architectural influences, testimony to the complex history of Transylvania.
Apart from its architecture [categorized by some as Romanesque or as a local syntheses of Romanesque and Byzantine architectures] the church is remarkable by the ubiquitous use of spolia from the ruins of the nearby capital of the Roman province of Dacia called Ulpia Traiana Sarmizegetusa, in the form of stamped bricks and various carved stones, some with Roman epigraphy. Presently it is considered to be the oldest Romanian Orthodox church building still in use today.