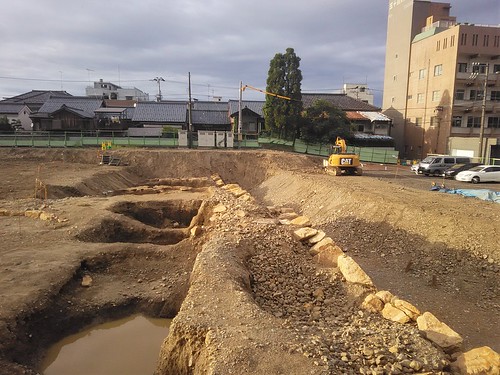 One by one the stones were selected or quarried then transported to the Hino River to convey downstream nearest the site of this castle. The well-known masons came from Omi (Shiga-ken) to make this edge of the facility and later were contracted to do the much bigger design with cut stone faces for Kaga castle in today's Kanazawa. Once the stone was assembled, the workers could select each distinctive piece and decide on its placement to form a solid design able to shed water and snow and to repel attackers by visual impression of impenetrability or by physical bulk and strength. The smaller stones to fill the gaps on the face locked everything into a single mass and the fill stones behind the face allowed rapid run-off and drainage to protect from weakening the heavy structure. Since the time that each piece was sourced, transported, and placed by hand 415 years ago it has remained frozen in time until now, expressing the mind and muscle of those long-ago workers. But now the city mayor exercised his power to demolish the structure and put some pieces back together at the front of the property in order to make the new construction work on the building site proceed unimpeded by concerns of history or legacy to future generations.
See full-image view by pressing 'z' or clicking the image; screen-fill by pressing 'L'.