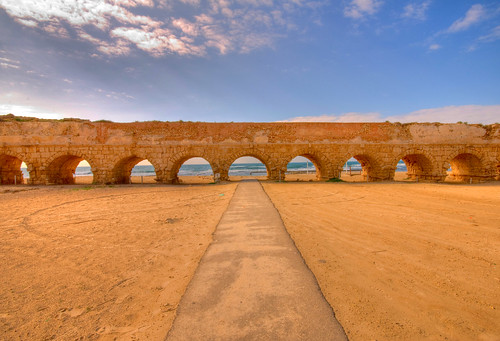 Herod built his palace on a promontory jutting out into the sea, with a decorative pool surrounded by stoas. In 13 BCE, Caesarea became the civilian and military capital of Judaea, and the official residence of the Roman procurators and governors, Pontius Pilatus, praefectus and Antonius Felix. Remains of the principal buildings erected by Herod and the medieval town are still visible today, including the city walls, the castle and a Crusader cathedral and church.

Archaeological excavations in the 1950s and 1960s uncovered remains from many periods, in particular, a complex of Crusader fortifications and a Roman theatre. Other buildings include a temple dedicated to Caesar; a hippodrome rebuilt in the 2nd century as a more conventional amphitheater; the Tiberieum, which has a limestone block with a dedicatory inscription [2]that is the only secular record of Pontius Pilate; a double aqueduct that brought water from springs at the foot of Mount Carmel; a boundary wall; and a 200 ft (60 m) wide moat protecting the harbour to the south and west. The harbor was the largest on the eastern Mediterranean coast. Caesarea grew rapidly, becoming the largest city in Judea, with an estimated population of 125,000 over an urban area of 3.7 square kilometers.

In 66 CE, a massacre of Jews here and the desecration of the local synagogue led to the disastrous Jewish revolt.[3]

Vespasian declared it a colony and renamed it Colonia Prima Flavia Augusta Caesarea.

Early Christian mentions of Caesarea in the apostolic period follow the acts of Peter who established the church there when he baptized Cornelius the Centurion (Acts, 10, 11). The Apostle Paul often sojourned there (9:30; 18:22; 21:8), and was imprisoned at Caesarea for two years before being taken to Rome (23:23, 25:1-13).