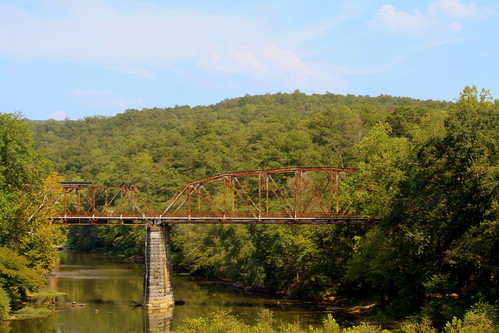 This old bridge with a main Parker through truss pluss two additional Pratt trusses crosses Mulberry Fork Black Warrior River which formers the boundary between Cullman County and Blount County. It was made obsolete when the newer bridge (where I am taking this photo from) replaced it in 1960. My GPS says the old road is passable, but there are barriers to prevent vehicular access across it. It's tough to see but there's also a railroad bridge behind it.

Plans are underway to officially make this a pedestrian bridge, although you can walk across it now. If it becomes a park, the overgrowth will be cleaned up and it will be made safer. There are also concrete stairs that lead from the road to the river bed below.