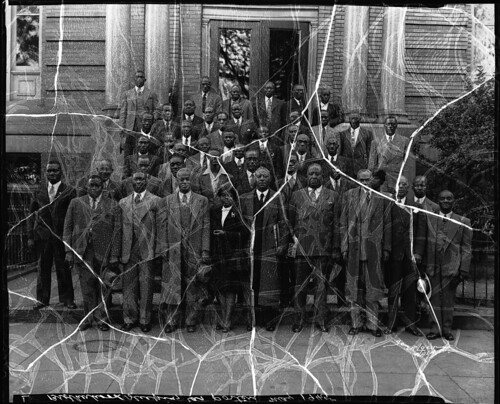 The Washington, D.C. chapter of the Brotherhood of Sleeping Car Porters is shown in a damaged May 1945 photograph in front of the black 12th Street YMCA.

The national union, headed by A. Phillip Randolph, began officially organizing in 1925 though efforts had begun as early as 1900.

In 1929 the American Federation of Labor (AFL) granted charters to a number of Porters’ local unions, including Washington, D.C.

The Pullman Company that employed most porters bitterly fought the union, using informants and hiring prominent black spokespeople to oppose the union and urge loyalty to the company

In 1934, the Railway Labor Act was amended to include porters and outlaw company unions. This gave the Brotherhood a legal avenue to pursue a contract with the company.

A nationwide representation election was held at the Pullman Company under federal auspices May 25, 1935 and the Brotherhood won 62 of 66 districts, including Washington, D.C. over the old company-sponsored Pullman Porters and Maids Protective Association.

The only districts where the Pullman’s union was defeated were in San Antonio, Tx.; Memphis, Tn.; Louisville, Ky.; and Atlanta, Ga.

The Brotherhood won a national charter from the AFL following their victory—becoming the first African American union chartered by the labor federation at a national level.

Negotiations with the company stalled for several years.

However, a contract between the BSCP and the Pullman Company was signed on August 25, 1937. It went into effect in October of 1937, raising the wages of porters and maids, establishing a basic 240-hour month, and providing time-and-a-half overtime pay after 260 hours.

The company also agreed to pay for the uniforms of porters after they'd been employed for ten years.

The union was always interwoven with the civil rights movement

Randolph was already a prominent spokesperson for civil rights when he was selected to head the National Negro Congress in 1937.

After leaving the NNC, Randolph organized the March on Washington Movement that planned a national march on the city to call for outlawing discrimination in employment.

Although his union was in decline due to fewer and fewer sleeping cars in service across the country, Randolph continued as a leading civil rights spokesperson and was chair of the 1963 March on Washington for Jobs and Freedom.

The union first merged into the Brotherhood of Railway and Airline Clerks in the 1970s and the three unions that represented on board workers joined to form the Amtrak Service Workers Council--BRAC, the Hotel Employees and Restaurant Employees (HERE), and the Transport Workers Union (TWU).

Craft lines and separate seniority lists for on-board workers were eliminated, with one labor agreement covering all. The chairmanship of the ASWC rotates annually among the chief executive officers of each constituent union's Amtrak bargaining unit.