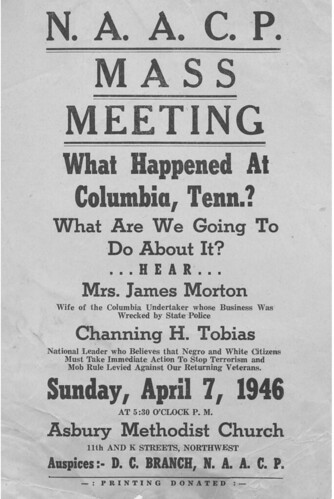 This handbill by the D.C. chapter of the National Association for the Advancement of Colored People (NAACP) calls for a protest meeting April 7, 1946 at the Asbury Methodist Church at 11th and K Streets NW

The meeting was called to protest a police riot in Columbia, Tennessee that resulted in shootings and looting black businesses and mass arrests of black people by state police after a white lynch mob had gathered in town.

The incident, along with the 1946 Moore’s Ford, Georgia lynching of four black Americans, galvanized the civil rights movement after World War II.

One of the main speakers was Channing Tobias, a leading civil rights figure at the time having developed a career in the black section of the YMCA and was director of the Phelps Stokes Fund that invested in education at the time of the meeting.

The other was Mrs. James Morton (first name unknown) of Columbia who provided eyewitness testimony of the destruction wreaked by state police.

Things began to deteriorate in Columbia, Tn. February 25, 1946 was a U.S. Navy veteran James Stephenson became involved in a scuffle with a white male clerk at an appliance repair shop. Stephenson was arrested for disturbing the peace, pled guilty and was fined 450.

However, later a warrant was sworn out for Stephenson for attempted murder and Stephenson was arrested again. This time a local businessman bailed Stephenson out.

White men with guns began to gather near the Maury County Courthouse. Fearing a lynching, black World War II veterans began arming themselves and patrolling the black community about a block away.

Four white police officers were sent into the black community and were met with gunfire that wounded all four.

In the early morning hours of February 26th, state police entered the black community firing on buildings and occasionally firing at people they saw.

They broke into homes and stores without warrants and stole goods and seized any weapons and ammunition they found.

When it was over approximately 100 black people had been arrested and held without access to an attorney or bail.

On February 28th, Columbia police killed two of the black prisoners saying they tried to escape.

Eventually 25 of the black men were charged with murder and six others for lesser charges. In the first trial all were acquitted except two men. However, prosecutors dropped the charges because they believed the case would be overturned on appeal. A later trial found one man guilty of shooting at a police officer and he served some jail time,

None of the white rioters and no police officers were charged.

An all-white federal grand jury investigating the disturbance found no evidence of civil rights violations and assailed the “avowed Communist press” and pamphleteers for “inflammatory” articles on the affair.

They went further to say that “falsehoods and half-truths” about Columbia were “designed to foster racial hatred and to array class against class.”

Virginia Durr of Washington, D.C. of the Southern Conference for Human welfare wrote in a letter to the Washington Post, “Everyone interested in protecting democracy at home should insist that the United States Department of Justice prosecute Chief Lynn Bomar of the Tennessee State Police, who was directly responsible for the outrages against the Negro citizens of Columbia.”

“The shocking report of the all-white federal grand jury concerning Columbia, Tennessee has jeopardized the safety of every citizen in the country, particularly Negros and members of other minorities. Failure to indict perpetrators will be interpreted as a signal by state official and the Ku Klux Klan thorough the south to terrorize Negro communities during the coming primary elections without fear of federal interference.

There has been in existence at all times, photographic and eyewitness evidence of actual violations of federal rights by State Highway Patrol and State Guard.

For more information and related images on the Moore’s Ford lynching, see flic.kr/s/aHsk2KEUC5