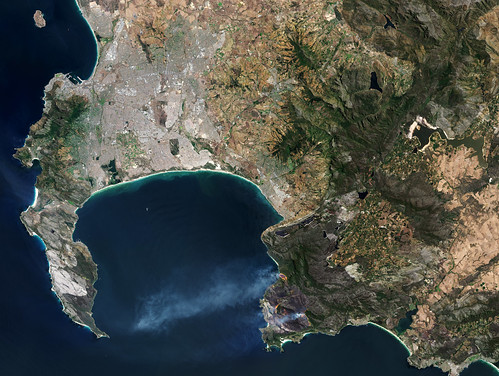 South Africa’s Western Cape often falls victim to fires during the dry hot summer months. Fires can ignite naturally but can also be the result of careless or deliberate human behaviour. This Copernicus Sentinel-2B image from 6 January shows several blazes around the Kogelberg Nature Reserve to the east of Cape Town. Smoke from the fires can also be seen blowing across False Bay towards the Cape Peninsula in the extreme southwest of South Africa. These fires are reported to be just some of those that firefighters have been dealing with in the region over the last weeks. The fires have posed serious risk to life, property and the environment, as well as incurring huge financial costs. Roads and resorts, which experience high volumes of traffic and visitors during the holiday season, have also been closed. The Kogelberg Nature Reserve is currently closed because of the fires, but it is considered to be very beautiful with an array of different plant species, many of which are endemic.