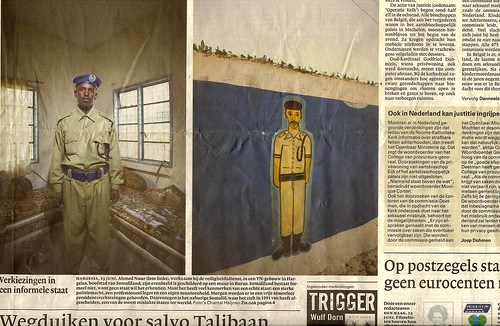 The NRC chose to put the story of the peaceful and democratic and free Presidential elections in Somaliland on its front page, with an article further in the middle of the paper. Agian it made the usual point that Somaliland is a free, peaceful and democratic country with a moderate form of Islam, but lacks recognition as an independent country. Many European countries would like to reciognise Somaliland';s independence but they feel that it is first up to the African states, through the African Union to do this - and these African states show no willingness to do so, fearing a domino effect, maybe affecting their countries (never mind the historical argument that Somaliland WAS an independent country before it rashly joined a union with its neighbour in the south.

In the meantime, the BBC found the most ridiculous angle on which to report this momentous event (the BBC's correspondent having a major antipathy towards Somaliland) by finding some idiot from the radical al-Shabab movement in Somalia to say that democratic elections were the work of the devil, were un-Islamic and should be boycot by the people of Somaliland. What a load of nonsense.

On the other hand, this is a gerat article (a bit shallow) but beautifully illustrated - from the New York Times - www.nytimes.com/2010/06/26/world/africa/26somaliland.html

There is a pretty good TV article by al-Jazeera on the elections here: www.youtube.com/watch?v=9l4Y-oggBnc - makes me want to go back!