Home » Photos » Yonge and Finch shut down due to mass attack

Yonge and Finch shut down due to mass attack 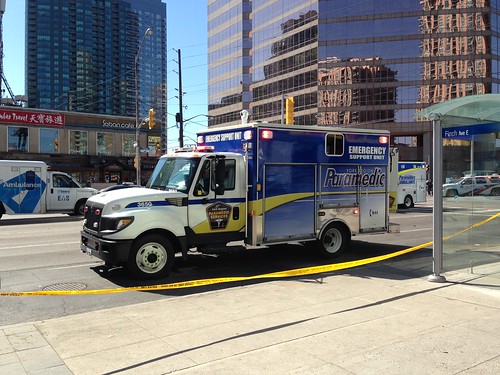 *** Just minutes after today's horrible attack, many of you started whatsapp'ing me, or via text messages and emails and even a long-distance phone call all the way from England. I just want to thank you all for your love, care and support. It makes a difficult day less maddening. ***

Mass murder possible terrorist attack outside of my office building at Yonge Street and Finch Avenue. Multiple casualties. Some of my colleagues saw some dead bodies. One of my colleagues was hurt and has undergone surgery at the hospital.

All we know is someone drove a rental van on to the sidewalk/ pavement at 1:30 PM today and hit multiple people. Latest updates say 10 people are dead, with 15 others injured. Investigation has just barely started, but according to the police, so far there is no evidence of the attack being linked to radical political or religious ideology.

This is very unnerving, as I go for a walk at lunch everyday, and this happened right at lunch time when many people were out enjoying the fine weather.